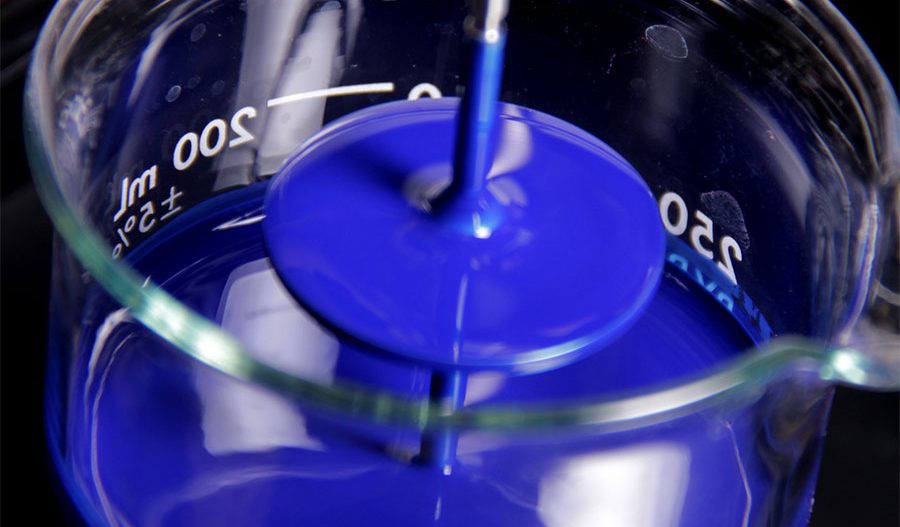 Scale-up from the lab to production has always been a challenge regardless of what industry you are in, and those who specialize in ink are no exception. There are many types of ink, from Gravure ink to Flexographic and Sheetfed to Offset and UV, and one thing they all have in common is that many of their physical qualities depend on the particle distribution of their pigments and fillers. These qualities include color, strength, transparency, gloss, opacity, chemical, weather resistance, and more.

Many pigmented inks start with a pre-dispersion, and the ink’s viscosity determines the type of disperser needed to perform this process. Lower-viscosity inks typically run on single-shaft dispersers, while higher-viscosity inks are generally run on dual- or even triple-shaft dispersers. The smaller the particle distribution after the pre-dispersion the better, especially if further processing on milling equipment is needed to decrease the particle distribution even more.

When scaling up from the lab to production with single-shaft dispersers, it’s important to remember the rules of thumb for dispersion. First, the blade must be 1/3 the diameter of the tank. A smaller blade may not produce the flow needed to produce a homogeneous mixture, while a larger blade may produce too much turbulence, requiring slower tip speeds to keep product in the tank and prevent the incorporation of unwanted air in the batch. The tip speed of the blade should be between 5,200 and 5,600 feet per minute.

Almost all scale-up differences come from variables in the lab that are not transferred to production. As noted, one of these differences may be that when running batches in the lab, the operator holds solvent or water out of the batch to control viscosity. In most cases, working in smaller tanks presents a problem with low-viscosity materials. When holding out solvent or water the operator is able to achieve higher tip speeds with a smaller vortex.

In addition to the difference in cooling area, single-shaft dispersers often have better flow patterns in tall, skinny tanks versus short, wide tanks. With low-viscosity products in taller tanks, operators also have the option of lowering the dispersion blade closer to the bottom of the tank to control the vortex, while shorter tanks do not have this option.

Another challenge is that production cooling water is often not as cool as water in a lab. Heat is often an issue with inks, so heat building up faster in production than in the lab could result in the production batch not being able to run for as long as the lab batch before it reaches critical temperature. This is another good reason to hold out water or solvent from the batch at the start, first to increase the solids and second to give the operator cooling material to add to the batch as the temperature increases.

Viscosity also contributes to differences between lab batches and production batches because lab operators will often make a batch on a single-shaft disperser with viscosities that are beyond the capabilities of the disperser, and to compensate for this, they must scrape the tank wall to incorporate any un-dispersed material. This is easy when dealing with small batches, but when the batch is transferred to production, the operator can’t perform this scraping and is left with material in the batch that has not been dispersed. If this batch is then transferred to a milling step, you run the risk of clogging mills. With that in mind, if the lab operator must scrape the tank wall during pre-dispersion, the batch should be made on a dual-shaft disperser with a sweep blade.

Dual-shaft mixers come with their own set of rules, and unless you are working with a concentric-shaft machine, the blade diameter will be smaller than the 1/3 blade-to-tank ratio. For the most part, dual-shaft machines also run at lower tip speeds because they are designed for higher-viscosity products, allowing you to generate more shear with lower speeds. Dual-shaft mixers also introduce a sweep blade to the tank, and while there are many blade designs on the market today, two we focus on are anchor and helical sweep blades.

This type of blade is used with scrapers to help move product off the tank wall and combine it with material in the center of the tank. If the tank is jacketed for cooling, scrapers pull cool material from the tank wall and incorporate this material into the rest of the batch. Without scrapers, the product will form a film on the tank wall and heat transfer will be greatly diminished. Most anchor-style blades are fitted with scrapers on the uprights of the blade and on the horizontal part of the blade to scrape the bottom and sides of the tank. This blade is great at removing material from the sides and bottom of the tank and forcing the material toward the middle and back into contact with the high-speed disperser blade.

The helical sweep blade uses the same frame as the anchor blade but also includes one or two spiral risers, which allow the blade to move high-viscosity materials in the batch toward the high-speed blade in a totally different manner. This blade lets the operator choose between a clockwise direction (pushing material up) and a counterclockwise direction (pushing material down). These options have a dramatic effect on the batch, and when the helical blade is pushing downward, a long slot is formed on the leeward side of the helical riser, allowing powders to fall in. Once powders have fallen into the slot behind the helical riser, the second helical riser pushes the material farther down into the batch, forcing it toward the middle of the tank and into the path of the high-speed disperser. When the helical blade is rotating clockwise, it brings material from the bottom of the tank to the top of the batch, which is especially useful when vacuuming a batch to remove entrapped air.

Rules of Thumb for Milling Scale-Up

Media type is dependent on both your product and machine size. Liters of media per gallon of product should be constant, and when working with basket mills you should typically scale up when running between 10 and 15 gallons of product per liter of media.

Milling scale-up comes with some of the same challenges as dispersing scale-up. Many of the problems with scale-up from lab milling to production milling come from being unable to build lab equipment small enough to scale properly to production equipment. Material suppliers often don’t offer options small enough for machinery manufacturers to build machines that will scale up directly from the lab to production. In these cases, it is important to understand the milling equipment and the variables between the lab models and production models of the same equipment.

Many times, it is also impossible for construction materials to hold up to the pressure needed to break down pigments or handle viscosities of products that would allow direct scale-up from the lab to production. It is also important to keep variables, including horsepower, kilowatt-hours, and throughput rates, as constant as possible.

Media mills come with a completely different set of variables, including media variables like type and size, throughput rates, and batch temperature. With all the different variables, you should focus on the one that will give you the best scale-up numbers. Mill manufacturers will typically tell you which of these factors will give you the best scale from a lab to production. We’ve found that the best scale-up numbers for basket mills come from a comparison of liters of media to gallons of product, and with that variable scale-up from the smallest mill to the largest is achievable. However, this may not work for other mill manufacturers. One other variable that we keep constant on the basket mill is tip speed of the impeller hub. By keeping this variable constant from the smallest to the largest mill, we drastically increase our scalability.

Now let’s look at a production mill for both a horizontal mill and a basket mill. If we use a horizontal mill with a 46-liter chamber volume and load it to 85% with media, we have 39 liters of media. If we are running a 500-gallon batch, that results in 12.8 gallons of product per liter of media. Looking at a similar basket mill holding 35 liters of media in the same 500-gallon batch, we end up with about 14 gallons of product per liter of media.

A great tool to help determine the largest agglomerate size of a particle distribution is a grind gage; however, there are many ways of reading a grind gage. Many companies read scratches on the grind gage while others read particles. Some also use automated draw-down machines to remove human error by ensuring they use the same pressure and dwell time for each draw-down. Other companies say that a draw-down should last for seven to 10 seconds with the draw-down bar at a 90-degree angle to the gage, while other companies use a 45-degree angle or any angle in between and pull the bar down much faster. Each of these variables will affect the results of the reading.

Scale-up from the lab to production comes with a wide range of challenges, but it is achievable if variables are consistent in both the lab and production environment. The process is not always linear. Interested to see how we could help with your business goals and scale-up process? Click here to contact us today, or learn more about our product testing lab. 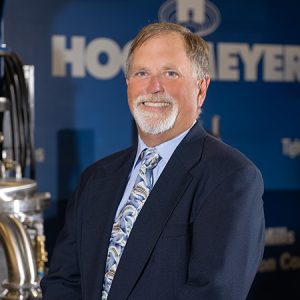 Barry Cullens, Director of R&D, joined Hockmeyer Equipment Corp. in 1984 when the company moved to North Carolina. He has helped create many innovative technologies at Hockmeyer during his time with the company and has been named on multiple patents for the Immersion Mill, NexGen™ Mill, NexGen™ Rotor Stator, and more. Barry graduated from the College of The Albemarle with an Associate degree in metallurgical science, drafting, machining, and welding. He is a member of the National Association of Printing Ink Manufacturers (NAPIM) and the American Coatings Association (ACA).